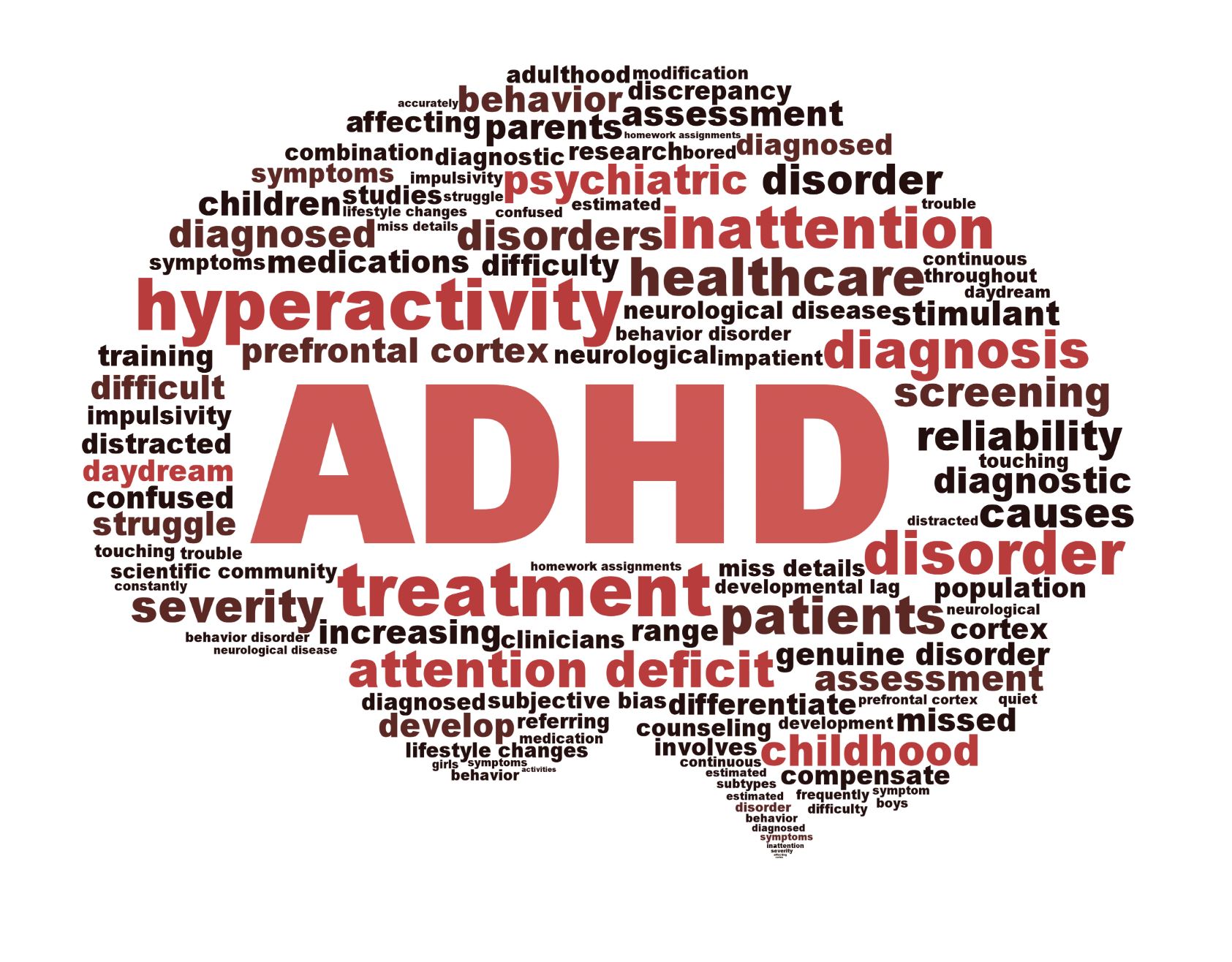 ADHD is a developmental disorder, present from birth, but only often obvious once other child's attention systems mature, but the ADHD child's remains significantly immature. Depending on the severity and subtype of ADHD it may be obvious in a 3 year old (particularly if very hyperactive), or may be diagnosed in later adultshood (if the person is relatively bright but inattentive).

The disorder has three main subtypes which can present as three very different disorders. Many families come into our clinic stating that their doctor has asked them to get an ADHD assessment, but their child couldn't possibly have it as they are not hyperactive. However, hyperactivity symptoms are not present in all subtypes, and the media portrayal of ADHD as a disorder of extreme hyperactivity and defiant disorder may sell stories due to the obvious extremity of behaviour, but in reality ADHD can be much more subtle and many children and adults can pass under the radar as they are just seen as 'dreamy' and 'in their own worlds'. Some people deny ADHD exists, and claims it is just bad parenting or naughty kids. However there are clear neurophysiological differences between the brains of child with and without ADHD, and if ADHD was just about parenting then all children in the family would have it, which is very rarely the case. ADHD can be a significant obstacle to children and adults in achieving their goals and can create significant frustration and emotional distress, not only for them, but their families.

Recent changes in name and diagnosis

Many people state they don't have ADHD but have ADD. However, this just reflects a change in the diagnostic name for the disorder. Initially it was called 'Minimal Brain Dysfunction', to reflect that even thought there was no gross brain damage in people with this disorder, something in the brain was still not functioning properly. In 1952 ADHD was not listed in the original Diagnostic and Statistical Manual of Mental Disorders (DSM), which is the means of classification and diagnosis most commonly used in Australia. ADHD was becoming increasing known around this time and was generall referred to as 'Hyperkinesis'.  In 1968 the DSM-II acknowledged it for the first time as 'Hyperkinetic Reaction of Childhood', focusing more on the hyperactive behaviours of the disorder.

By the DSM-III in 1980 the name was changed to 'Attention Deficit Disorder', creating two subtypes: one with hyperactivity and one without. This began to recognise that the issues were more related to an attention deficit, rather than just by hyperactive behaviour.

The DSM-IIIR in 1987 was a revision of the DSM that changed the name to 'Attention Deficit Hyperactivity Disorder', however the three types of symptoms (inattention, hyperactivity and impulsivity) were combined into one disorder, with no subtypes specified.

The DSM-IV in 2000 finally distinguished between the three subtypes of ADHD currently accepted today:

The DSM-5 in 2013 made a few changes: (1) The criteria for adults only now requires 5 of the criteria needed for diagnosis, rather than 6 criteria as required by children and teens. (2)The onset of symptoms has now changed from before age 7 to before age 12 years. (3) Autism Spectrum Disorder (ASD) can now be co-diagnosed, whereas previously people with ASD could not be diagnosed.

Some of the most interesting changes were however very subtle but will have big ramifications for the numbers of people diagnosed:

(2) Previously functional impairments (Criterion D) needed to be 'clinically significant', whereas now they need only to reduce the quality of social, academic or occupational functioning.

This means that the functional impairments now do not need to be as clinically obvious and impairing, which does however now leave it more in the hands of a clinician to make a judgement if the attention issues are at the level of a 'disorder' or just a 'weakness', subclinical for diagnosis. This makes diagnosis much more difficult for people who are not highly experienced in this field, as the criteria now lend itself much more to potential over-diagnosis, a problem that has been asserted in the media for years.

The future names and diagnosis of ADHD have yet to be determined, however there is talk that ADHD without hyperactivity is actually a distinct disorder, one which has been referred to as 'Sluggish Cognitive Tempo'. We agree that the disorders and neurophysiology behind those with and without hyperactivity seems quite distinct, and it seems likley that the name of ADHD will continue to evolve as the underpinnings of it neurobiology emerge. At BrainX ADHD Clinics we treat people according to their brain neurophysiology, cognitive profile, and psycho-social-behavioural symptoms, rather than just the box the DSM-5 put one into. At BrainX we believe in a 'personalised medicine approach', that is each patient is seen as a unique individual who needs a tailored treatment program specific to their needs.

Attention Deficit/Hyperactivity Disorder (ADHD) is considered a developmental disorder which means it originates in childhood and involves significant problems with attention, and typically excessive activity and impulsive behaviours. Often the presentation of ADHD in children varies significantly and is dependent on things like the degree of symptoms, age of onset and whether the child presents with other disorders.

According to the DSM-5 diagnostic criteria, Attention Deficit Disorder and/or Hyperactivity Disorder could be diagnosed if:

1. A persistent pattern of inattention and/or hyperactivity-impulsivity that interferes with functioning or development, as characterised by (1) and/or (2):

(1.) Inattention: Six (or more) of the following symptoms have persisted for at least 6 months to a degree that is inconsistent with developmental level and that negatively impacts directly on social and academic/occupational activities:

Note: The symptoms are not solely a manifestation of oppositional behaviour, defiance, hostility, or failure to understand tasks or instructions. For older adolescents and adults (age 17 and older), at least five symptoms are required.

(2.) Hyperactivity and impulsivity: Six (or more) of the following symptoms have persisted for at least 6 months to a degree that is inconsistent with developmental level and that negatively impacts directly on social and academic/occupational activities:

Note: The symptoms are not solely a manifestation of oppositional behaviour, defiance, hostility, or a failure to understand tasks or instructions. For older adolescents and adults (age 17 and older), at least five symptoms are required.

3. Several inattentive or hyperactive-impulsive symptoms were present prior to age 12 years.

4. Several inattentive or hyperactive-impulsive symptoms are present in two or more settings (e.g., at home, school, or work; with friends or relatives; in other activities).

5. There is clear evidence that the symptoms interfere with, or reduce the quality of, social, academic, or occupational functioning.

6. The symptoms do not occur exclusively during the course of schizophrenia or another psychotic disorder and are not better explained by another mental disorder (e.g., mood disorder, anxiety disorder, dissociative disorder, personality disorder, substance intoxication or withdrawal).

314.01 (F90.2) Combined presentation: If both Criterion A1 (inattention) and Criterion A2 (hyperactivity-impulsivity) are met for the past 6 months.

314.00 (F90.0) Predominantly inattentive presentation: If Criterion A1 (inattention) is met but Criterion A2 (hyperactivity-impulsivity) is not met for the past 6 months.

314.01 (F90.1) Predominantly hyperactive/impulsive presentation: If Criterion A2 (hyperactivity-impulsivity) is met but Criterion A1 (inattention) is not met over the past 6 months.

In partial remission: When full criteria were previously met, fewer than the full criteria have been met for the past 6 months, and the symptoms still result in impairment in social, academic, or occupational functioning.

Mild: Few, if any, symptoms in excess of those required to make the diagnosis are present, and symptoms result in only minor functional impairments.

Moderate: Symptoms or functional impairment between “mild” and “severe” are present.

Severe: Many symptoms in excess of those required to make the diagnosis, or several symptoms that are particularly severe, are present, or the symptoms result in marked impairment in social or occupational functioning.