Electroencephalography (EEG) is the measurement of electrical patterns at the surface of the scalp which reflect cortical activity, and are commonly referred to as “brainwaves”.  Quantitative EEG (qEEG) is the analysis of the digitized EEG, and in lay terms this sometimes is also called Brain Mapping. The qEEG compares the brain waves to a normative database, that is, your brain waves are compared to people the same age. The processed EEG is commonly converted into color maps of brain functioning called brain maps. 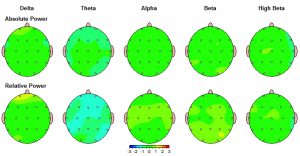 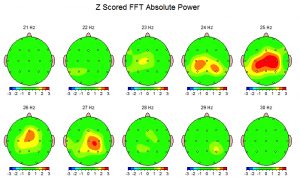 What are the different types of brain waves?

Delta waves are the slowest of brainwaves, mainly present during the deepest levels of sleep. Excess delta on qEEG usually is associated with more severe forms on inattention of brain dysfunction.

Theta waves are associated with drowsiness, like when you are about to fall asleep. Excess theta during waking hours is very common in people with ADHD and is associated with signs of inattention and sluggish cognitive processing.

Beta waves are considered fast wave, and are involved in active, engaged thinking. Low levels of beta can also look like ADHD, as processing can be sluggish. Excess beta can be associated with a racing mind, or over thinking. This can lead to problems fixating attention on one task or issues with anxiety.

Why have a QEEG?

QEEG is not a routine part of an ADHD assessment unless patients/families specifically request it. It is however done routine for people who want to engage in neurofeedback therapy. QEEG is not diagnostic of ADHD, however there are certain signs that are typically seen in people with ADHD. It is not diagnostic as these signs are nonspecific. For example, high levels of slow wave can be present in ADHD-inattentive, depression or even after brain injury. It is however helpful as all of those issues tend to be associated with lower levels of energy, cognitive sluggish and inattention. Likewise, ADHD can also be associated with excess fast wave, as can anxiety. Patients often request QEEG as they want to see objective evidence that the brain is affected and dysregulated, as well as know which areas are specifically affected. This information can be used for treatment in neurofeedback as sensors are then placed over these regions, and the brain regions are trained to inhibit or increase certain brainwaves.

The qEEG can be interpreted and used as a clinical tool to evaluate brain function, and to track the changes in brain function due to various interventions such as neurofeedback or medication.